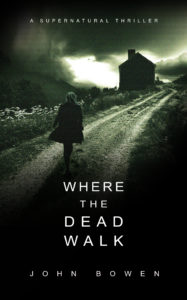 Kate Bennett may present a paranormal investigation TV show, but she’s not seen much to dent her scepticism, until she’s drawn to a building that holds secrets from her past. That’s the premise for a book which may look standard (albeit brilliantly-written) supernatural thriller, but which turns out to be so much more.

Where the Dead Walk is a masterpiece, a combination of smart, witty writing and a riveting plot that keeps you guessing to the end. It’s gloriously atmospheric where it needs to be, and blessed with some fantastic twists and a pace that builds steadily and effortlessly to a frantic denouement. Meanwhile, a cast of well-defined, genuinely engaging characters draw you in and won’t let you go. But like the best in it’s genre, Where the Dead Walk is more it’s plot and characters. Yes, there are spirits and supernatural, but underpinning it all is a truly perceptive and beautifully-rendered meditation on the nature of loss and grief, worked so subtly into the plot that far from derailing it, they propel it inevitably on.