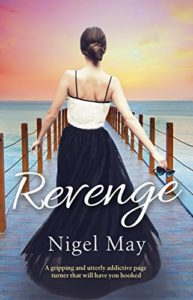 As the weather starts to warm up, if you are looking for a blisteringly hot read for the summer poolside or simply to whisk you off from the normality of everyday life then look no further. Nigel May’s sixth novel is a divine murder mystery cocktail of celebrity, intrigue, thrills, backstabbing and glamour. Nigel has been called ‘the UK’s male Jackie Collins’ and it’s easy to see why. His novels require page-turning so quickly that you are likely to gain blisters as the action is so plentiful. Revenge is a juicy romp which starts off with a mysterious death in the lush forestation of Brazil and then leaps forward five years to sexy celebrity chef Dexter Franklin as he gets ready to launch his new A-list restaurant in the backstreets of the jet-set capital of Europe, St Tropez. The list of wannabes wanting to show their faces at his opening night is long, but Dexter is merely concerned that five certain faces are on the guest list. They include a sultry Latina actress, two ex-girlband members who are definitely not up for a reunion and Dexter’s very own nemesis, his rogue brother Leland. As they all sit down to enjoy the launch party, if looks like revenge, revelations and regrets are on the menu. Spicy and sexy and as wickedly good as blockbuster novels get. Pamper yourself with Revenge.