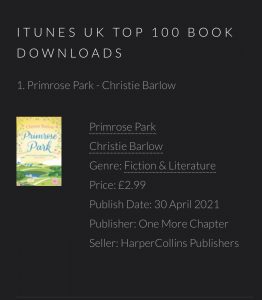 Primrose Park by Christie Barlow and published by One More Chapter, global publishing division of HarperCollins UK flew into the Number 1 Top Spot on iTunes within only a few hours of being released.

This is the sixth book in the Love Heart Lane series which can also be read as a standalone and now with the series selling over 150,000 copies it’s become a firm favourite amongst readers within the romantic comedy community.

Vet Molly has always been career driven and focussed on caring for her animals, but when she meets a gorgeous Mystery Man at a conference and their connection is off the charts, well, one night off work won’t hurt anyone…except the next morning he’s vanished and all Molly knows about him is his first name.

Three months later, back in Love Heart Lane, everyone loves the story of Molly’s amazing one-night stand.  It’s so unlike her! But when Mystery Man turns up walking his dog through Primrose Park and their night together seems to mean nothing to him, Molly needs her friends and neighbours more than ever. And especially when she’s left with the most unexpected of surprises…