ONE of the country’s biggest selling authors is a former Weaverham schoolgirl. 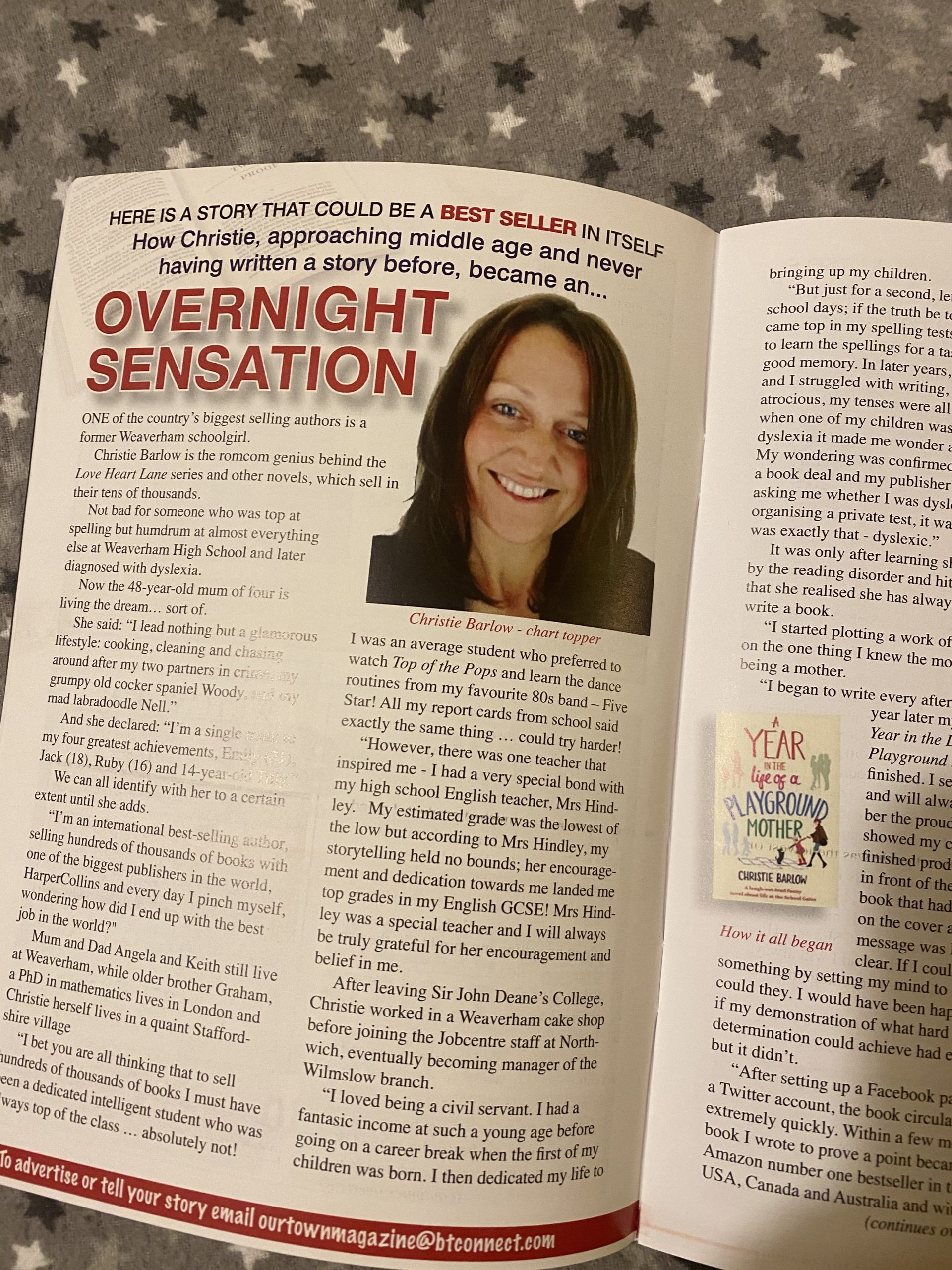 Christie Barlow is the romcom genius behind the Love Heart Lane series and other novels, which sell in their tens of thousands.

Not bad for someone who was top at spelling but humdrum at almost everything else at Weaverham High School and later diagnosed with dyslexia.

She said: “I lead nothing but a glamorous lifestyle: cooking, cleaning and chasing around after my two partners in crime, my grumpy old cocker spaniel Woody, and my mad labradoodle Nell.”

We can all identify with her to a certain extent until she adds.

“I’m an international best-selling author, selling hundreds of thousands of books with one of the biggest publishers in the world, HarperCollins and every day I pinch myself, wondering how did I end up with the best job in the world?”

Mum and Dad Angela and Keith still live at Weaverham, while older brother Graham, a PhD in mathematics lives in London and Christie herself lives in a quaint Staffordshire village

“I bet you are all thinking that to sell hundreds of thousands of books I must have been a dedicated intelligent student who was always top of the class … absolutely not! I was an average student who preferred to watch Top of the Pops and learn the dance routines from my favourite 80s band – Five Star! All my report cards from school said exactly the same thing … could try harder!

“However, there was one teacher that inspired me – I had a very special bond with my high school English teacher, Mrs Hindley. My estimated grade was the lowest of the low but according to Mrs Hindley, my storytelling held no bounds; her encouragement and dedication towards me landed me top grades in my English GCSE! Mrs Hindley was a special teacher and I will always be truly grateful for her encouragement and belief in me.

“I loved being a civil servant. I had a fantastic income at such a young age before going on a career break when the first of my children was born. I then dedicated my life to bringing up my children.

“But just for a second, let’s return to my school days; if the truth be told, I always came top in my spelling tests because I had to learn the spellings for a task and had a good memory. In later years, this all changed and I struggled with writing, my spelling was atrocious, my tenses were all mixed up and when one of my children was diagnosed with dyslexia it made me wonder about myself.    My wondering was confirmed when I landed a book deal and my publisher contacted me asking me whether I was dyslexic. After organising a private test, it was confirmed I was exactly that – dyslexic.”

It was only after learning she was afflicted by the reading disorder and hitting midlife that she realised she has always wanted to write a book.

“I started plotting a work of fiction based on the one thing I knew the most about: being a mother. 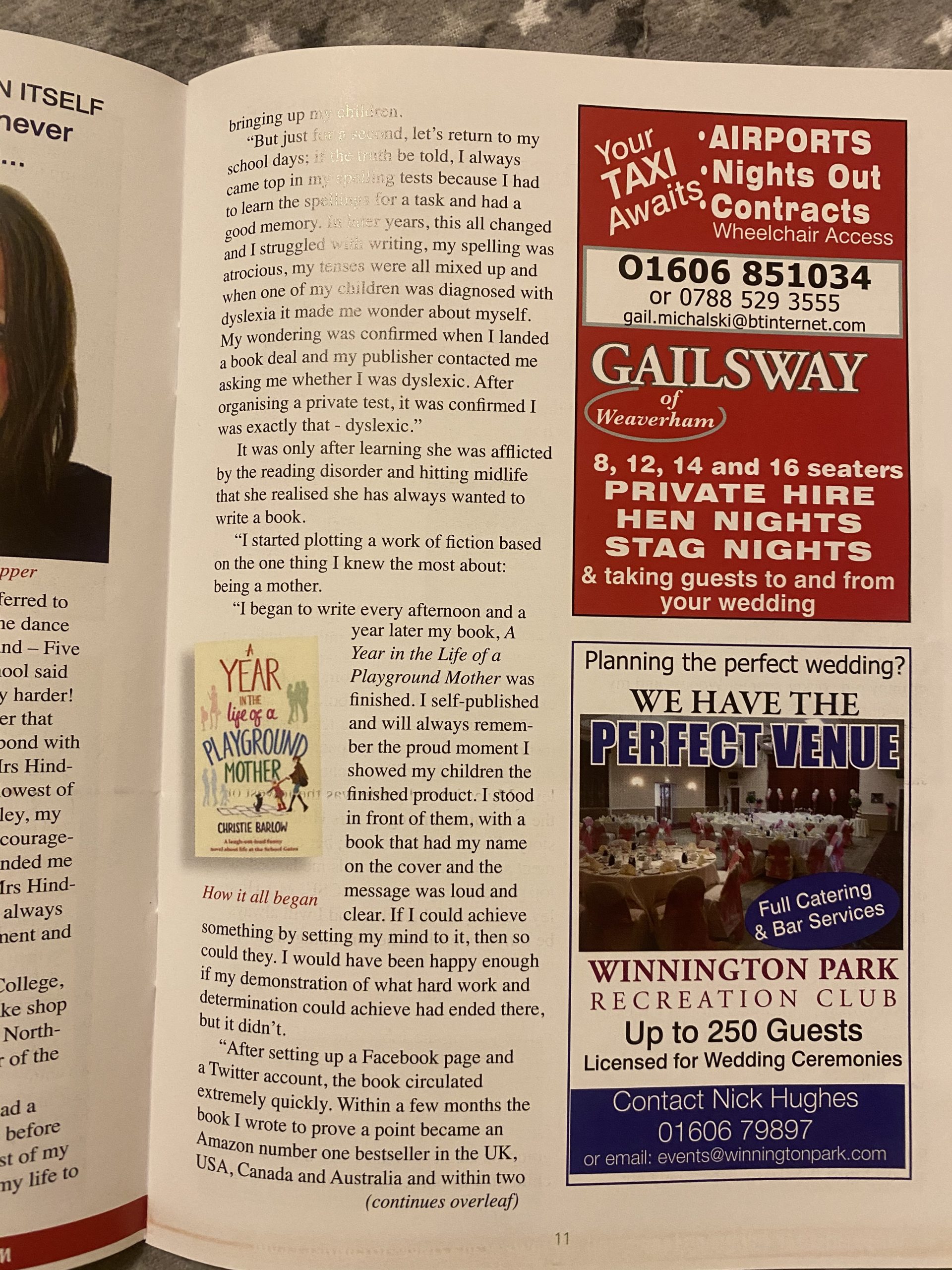 “I began to write every afternoon and a year later my book, A Year in the Life of a Playground Mother was finished. I self-published and will always remember the proud moment I showed my children the finished product. I stood in front of them, with a book that had my name on the cover and the message was loud and clear. If I could achieve something by setting my mind to it, then so could they. I would have been happy enough if my demonstration of what hard work and determination could achieve had ended there, but it didn’t.

“After setting up a Facebook page and a Twitter account, the book circulated extremely quickly. Within a few months the book I wrote to prove a point became an Amazon number one bestseller in the UK, USA, Canada and Australia and within two weeks I’d sold over 30,000 copies and had publishers ringing me from London asking what else I had written.

“Everything happened so fast; within three weeks I’d signed to a publisher who offered me a five-book deal. How could this actually be possible? My normal day-to-day life had catapulted into a mad but exciting world of writing books and the words ‘fake it till you make it’ sprang to mind!

“With all five books hitting the top spot, whether it was on Amazon or iTunes, my first book contract came to an end and I needed to decide what was next for me. I didn’t have to think for very long as that very afternoon I received an email from HarperCollins; they’d read my books and would like to work with me. I was amazed! The boss at HarperCollins had been following my career and was now offering me a contract.

“This was the stuff that dreams are made of!

“After signing a ten-book deal with one of the biggest publishers in the world, I began to write the Love Heart Lane Series which is based in a fictional village in the Scottish Highlands. This series is fast becoming iconic with pre-orders placing the books in the charts before I’ve even written them! It’s feel-good fiction and the only books you need during this current climate – heart-warming, uplifting with a cast of characters who will become your best friends.” 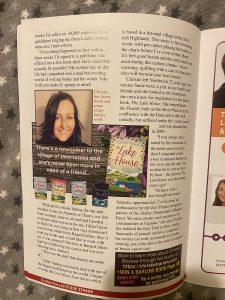 Christie left Northwich 22 years ago, but returns home twice a year to see family and friends and she looked to the Northwich she once knew for inspiration for her latest book, The Lake House. She remembered the Floatel, built on the River Weaver at its confluence with the Dane and it did well  initially, but suffered under the ‘credit crunch’ and was demolished in 2009.

“I was always fascinated by the structure of the hotel and even back then I imagined a hideaway resthaurant further up the river and the only way to dine there was to travel by boat – the idea for The Lakehouse was born many years ago!

“Being a writer has brought me many fantastic opportunities; I’ve become an ambassador for the Zuri Project alongside patron of the charity, Emmerdale’s Bhasker Patel. We raise money and awareness for communities in Uganda.” she said. Christie has trekked the Inca Trail in Peru, raising thousands of pounds and also completed the twenty-six mile moonwalk in London wearing just a bra above the waist in support of breast cancer care.